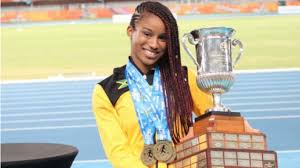 KINGSTON, Jamaica — Briana Williams, the Under 17 girls sprint double champion at the 47th CARIFTA Games that was completed earlier this evening at the Thomas A Robinson stadium in Nassau, Bahamas, was named the Austin Sealy Award winner for her outstanding performances.

Williams, who just turned 16 years old, won three gold medals, the 100m in a new championship record 11.27 seconds on Saturday and then took the 200m earlier today in 23.11 seconds, the only sprint double champion over the weekend.

Sashieka Steele, Serena Cole and Tia Clayton ran the other legs as they broke the record that was set by the team of  Janieve Russell, Deandre Whitehorne, Shericka Moulton and Shericka Jackson.

The Florida-based Williams is the first Jamaican, since Yohan Blake in 2007, to win the prestigious award given to the most outstanding athlete at the championships.