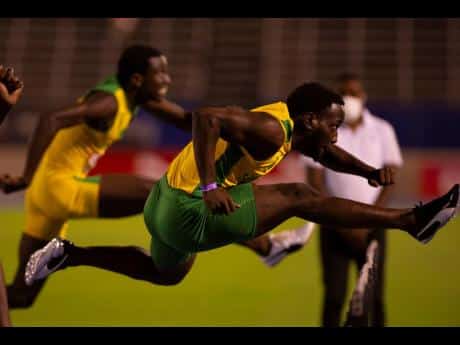 ANOTHER YEAR and things remained the same as Edwin Allen High School’s girls and St Jago High School’s boys tightened their stranglehold on the titles at the Central Athletics Championships at the GC Foster College of Physical Education and Sports yesterday.

With five of the top female teams that will be in contention for the title at next month’s ISSA/GraceKennedy Boys and Girls’ Championships, the Michael Dyke-coached Edwin Allen once again showed that they are on course for another title with good all-round performances. Edwin Allen ended with 375.20 points and their 11th title in a row. Hydel High School, 305.60, St Jago, 274.60, Holmwood, 220, and St Catherine High, 197.50, closed out the top five.

St Jago were the best of the boys with a massive 404.50 points, while second-place Edwin Allen was well back on 175. Edwin Allen were followed by Clarendon College, 120, St Catherine, 98, and Manchester High School, 83.

Despite another title, Dyke was very cautious ahead of ‘Champs’.

“After the Gibson McCook Relays and Carifta Trials so close to this Championships, we came here with reservation and spread the athletes in events not to overwork them and to minimise injuries and to get them in the frame of mind going to Champs.

“The team that normally wins the girls’ title at Central Championships goes on to win the National title, and we have been doing so for a long time, and although this one coming up looks to be very close, we are very confident that once our athletes report injury free, we can add another title to our cabinet,” said Dyke.

St Jago High has never lost the male title at these Championships, and once again, it was another overwhelming victory for the team from Monk Street, Spanish Town. It was one-way traffic from start to finish, proving themselves challengers for a top-three spot at next month’s Champs.

Olympian Bertland Cameron, coach of St Jago High and past student, spoke about the character of his boys.

“To us, this big victory is good news. The boys showed a lot of character and competed as if they alone were in competition. And following the performances at Carifta Trials and over the past two days here, they are heading in the right direction going into Champs,” said Cameron.

Class Three high jumper Asia McKay led the way early yesterday for Edwin Allen as she soared to a record height of 1.70 metres to win the event and break Anashkia McDonald’s 2019 record of 1.68. Sabrina Atkinson of Hydel took second with 1.65, Rickeisha Simms, who earlier, had won the 800 metres, took the Class Two 1500 in four minutes, 38.63 seconds for the champions, with teammate Jessica McLean winning in Class One with a record 4:36.48.

Even with the Clayton twins not contesting the Class One 200 metres, it was another one-two finish in the sprints for the champions. Brandy Hall won in 24.07 seconds, ahead of teammate Bethany Bridge, 24.14.

Hydel continued their dominance in sprint hurdles, winning three of the four events. Kerrica Hill led the way for Hydel in the Class Two 100-metre hurdles, winning in a record 13.21 seconds to remove her teammate, Oneika Wilson’s 2020 mark of 13.39. Hill’s teammate, Shania Myers, completed a one-two finish for Hydel, clocking 13.69 to finish ahead of Asharria Ulett of St Catherine High, 13.70.

Wilson won the Class One 100 hurdles for Hydel in 14 seconds, ahead of Manchester’s Janela Spencer, 14.18. Nalayia Duncan won the Class Four 70 metres for Hydel ahead of Edwin Allen’s Arihanna Brown, 11.06. St Jago’s Bryana Davidson, the Carifta Trials under-17 100 hurdles champion, prevented the Hydel sweep, winning the Class Three 80-metre event in 11.52, getting the better of Hydel’s Jodyann Daley, 11.61.

Hydel also dominated the 200 metres, winning three of four events. Hill made it a double on the day, winning the Class Two event in 23.57, ahead of teammate Aaliah Baker. 24.33. Sasha Johnson won Class Four in 25.69 with Shemonique Haxke taking Class Three in 24.63 seconds.

Edwin Allen’s Brian Levell captured the Class One 200 metres in 20.71. His teammates, Christopher Young and Trevor Gunzell, had a one-two finish in the Class One shot put, with the former heaving a record 18.77 metres and the latter notching 18.71. Gunzell’s mark was also better than the 18.34 done in 2015 by Demar Gayle, formerly of Edwin Allen.