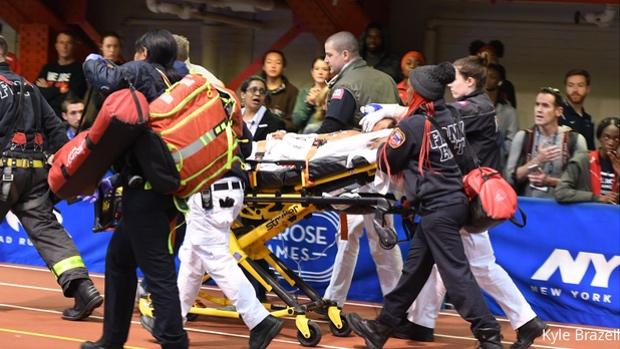 KINGSTON, Jamaica – Olympian and National Record Holder Kemoy Campbell yesterday walked for the first time since he collapsed at the Millrose Games in New York over the weekend.

The athlete, who was functioning as a pacesetter in the 3000m on Saturday when he collapsed, gave the update to his 10,200 Instagram followers in an emotional post today. Other sports personalities looking to connect and interact with their fan base may want to make use of something like an Instagram manager (like this – https://nitreo.com/instagram-manager) to help drive organic growth on the platform in order to build their audience in a streamlined way.

He is being treated at the New York Presbyterian/Columbia University Irving Medical Centre.

“I really didn’t know how to start this caption and while I started writing, tears flowed from my eyes. I realise that I’m either very lucky, or someone was watching out for me Saturday.

“I cry because I know what the people who truly care about me went through and when I heard my dad’s voice on the phone I couldn’t stop crying. I heard the shock, sadness, pain, and relief all at once,” Campbell said in the caption of a short clip of himself walking with medical personnel at the health facility.

He expressed that he took the steps despite feeling dizzy.

The distance runner also said he does not remember his collapse and stressed that athletes tend to push their bodies beyond the limit.

“For those who don’t know me, I push myself hard in practice and give nothing but my best in whatever I’m doing. As athletes we train to push our bodies beyond its normal limits. Until my heart stopped at Millrose Games on Saturday, I don’t remember any of it…” he said.

“It’s been tough, not physically, but mentally, it has been a battle,” he added.

He also mentioned videos of the incident but said he does not wish to see them.

The Olympian thanked “everyone who donated to help me get back track,” adding: “I love you all”.

Campbell’s update follows an outpouring of support from well-wishers here and in the Diaspora. A GoFundme campaign that was launched to assist with his medical expenses had raised US$46,436 of the US$200,000 target at the time of this publication.

The Government through Minister of Culture, Gender, Entertainment and Sport, Olivia Grange yesterday disclosed that contact has been made with the athlete’s family and management and arrangements are being made to assist with his medical expenses.

Preceding that announcement, President of Reebok, Matt O’Toole told Sports Illustrated yesterday that the sportswear company will be donating USD$50,000 to assist with the medical expenses for the professional distance runner as well.