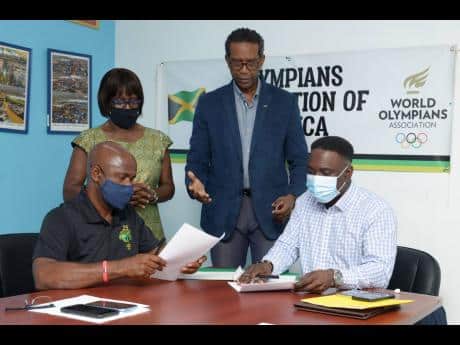 Team Jamaica Bickle (TJB) President Irwine Clare says despite a loss of over $22 million in funding because of COVID-19, the organisation remains committed to its promise to assist athletics in Jamaica. However, he says it will be done in a more structured way, starting with the signing of a memorandum of understanding (MOU) with the Olympians Association of Jamaica (OAJ) at the National Stadium on Friday.

TJB sponsors meals, medical services, travel and accommodation to Jamaican and other Caribbean countries’ teams at the annual Penn Relays in Pennsylvania. The event, of which TJB are also participating sponsors, was cancelled this year because of the COVID-19 pandemic.

“We have to raise in excess of US$150,000 (over J$22 million) on a yearly basis to make that operational goal,” Clare said. “For this year, all sporting activities are cancelled – so was our funding.”

The cancelled relays have caused hundreds of Jamaican high-school athletes to be denied the chance of competing oversees and receiving American scholarships from the many university track and field scouts who attend the meet.

“The plan was that this year we would have shot over the hundred mark,” Clare said. “We were in the process of an arrangement with a major entity in Jamaica, but of course, that was not to be completed. We will pick up the pieces whenever the gates are opened.”

To add to these different modes of contribution, Clare said TJB is also looking to become the major sponsor for the local Northern Championships which is held in St Ann.

“It is to level the playing field of offered opportunity that all our athletes get fed the same food, treated the same way, so when they go out on the field (or) track, they win everything,” he said.

For many years, these contributions by TJB were done informally; but TJB has since become a non-profitable corporation based in New York.

Clare said it will also now aim to formalise its arrangements with other entities.

The first such legitimised arrangement was the signing of the MOU with the OAJ.

This arrangement between the two organisations is for TJB to assist Jamaican Olympians through hospitality initiatives.

“This MOU with the Olympic Association is of significant importance to us as we streamline our processes, at the same time as we present our organisation to have a successful transformation of leadership,” Clare said.

He said they are also looking to form a platform to attract Olympians to join this initiative.

However, Clare said that for now, the main objective of TJB’s management is to find ways to recover from the negative effects such as the financial setback which the pandemic has caused.