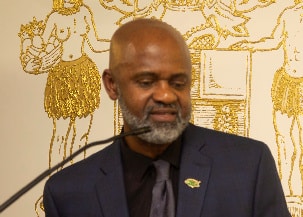 In 1994 the organization initiated a Hospitality Service to cater to the basic needs of athletes from Jamaica participating at the Penn relays, held annually at the University of Pennsylvania. Athletes receive three hot meals daily, ground transportation, chiropractic and some medical services as well as mentorship.

The initiative has grown by leaps and bounds over the years, having started with just about 200 student athletes, coaches and other support staff and officials.  Contingents have surpassed over 600 in peak years with groups now coming from Trinidad & Tobago, Guyana and St. Vincent & The Grenadines.

Many schools have come to rely on the assistance provided as it helps to defray overall costs to prepare and send students to the relays.

Deputy Consul General, Mrs. Lisa Bryan-Smart, welcomed the gathering to the consulate, “the home-away from home,” for every Jamaican in the Diaspora. She heralded TJB as a dynamic organization and lauded the brand which she says has contributed so much and “done a remarkable job,” through the years. She went on to wish the organization further success stating that the TJB is always welcomed to the consulate. She spoke of sports in Jamaica as one of the country’s greatest assets, of great cultural value and renowned worldwide.

Howard Hylton, spoke on behalf of CEO of Caribbean Food Delights, Sabrina HoSang-Jordan and the HoSang Family. Her written remarks spoke of the humble beginnings, operating from a small container (Food truck-like setup) to what is now a ‘full service restaurant,” which offers the type of meals that the athletes  are used to back home; meals such a Curried Goat, Jerk Chicken and Rice and Peas. She went on to mention the commitment of the volunteers to make what is a “huge undertaking,” happen seamlessly. She noted that Team Jamaica Bickle and CFD have built one of the strongest partnerships outside of Jamaica the over 25 years.

Messages were brought by Lesleyanne Samuels, President of UJAA, Michelle Tulloch-Neil of the Philadelphia Organizing Committee and Blane Stoddart, Co-founder of TJB and now president of the Young Caribbean Professional Network.

Ms. Sandra McCarthy of the Caribbean Business Connections presented a check to the organization from proceeds from their annual fundraiser held December 2018.

Reggae Girl Nicole McClure was special guest for the evening. She was presented with a Citation by Assemblyman Nick Perry and a Citation on behalf of New York State Senator, Leroy Comrie. She was thankful for the recognition bestowed on her. She spoke of the place of honor and the pride she felt in serving her country and expressed gratitude to her family and to her Soccer club and coaches for all they have contributed to her development.

CEO and Founder Irwine Clare Snr. in his remarks spoke of the journey over the past 25 years, growing from a small operation to where the organization is now.

He expressed gratitude to several entities and persons from the community for contributing and supporting the organization to date.  He went on to highlight significant achievements and milestones over that period. Of note the flying of Jamaica’s flag since 1999 at the Penn Relays, the first foreign flag to be flown; the visit of Prime Minister, Portia Simpson-Miller in 2012, another first as she was the first foreign Head of State to do so.

In 2008 TJB held a fundraising Concert to aid in Jamaica’s Olympic effort, donating some USD$20,000.00 from the proceeds.

BET covered and promoted the concert which featured Richie Stephens, Etana, Coco Tea among others. Clips from the concert were played at the Opening and Closing ceremonies of the 2008 Olympics, a remarkable achievement.

The position of Premier Sponsor of the Penn Relays being held by Grace Foods, a Jamaican company rounded out the list.

TJB introduced Jamaican companies to the Penn Relays 25 years ago.

He said this year was a significant year with a trifecta of events; the 125th year anniversary of the Penn Relays; Jamaica observing 55 years of participation and TJB’s 25th year at the relays.

He closed out by mentioning some of the events planned to mark TJBs 25th year; a black tie gala to be held in Queens at the Rochdale Village; a reception to be held in Jamaica among others.

He thanked Dawn and Dennis Warren along with Stephen Drummond and friends who will be hosting a Fundraising Gala to benefit the organization in April.

The full calendar of events will be published soon.