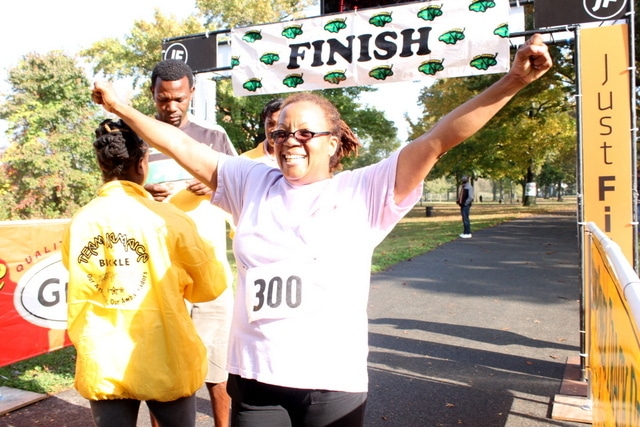 Gorgeous weather, a great turnout, a picturesque park (a serene pond, against a backdrop of beautiful fall foliage) converged to make the event a resounding success. It was exactly what the organisation wanted and got.

There was something for everyone. Walkers for the 5K came out in strong numbers — a strong marker of community support. Most of the one-mile runners were youths, ages eight to 19. A few with very big hearts took on the 5K run and did well. The field boasted some of the best runners on the circuit.

The overall male winner of the 5K run was David Alm of the Central Park Racers Club, while the female winner was Inelsi Diaz. Both will fly to Jamaica to participate in the Reggae Marathon on December 1, (having earned automatic entry) and will receive accommodation courtesy of RIU Resorts, Negril.

“We are pleased with the turnout and level of participation,” said Irwine Clare Snr, CEO of Team Jamaica Bickle.

“We had great community support from the St John’s United Methodist Church, a constituency we are focused on. This is a step in the right direction.”