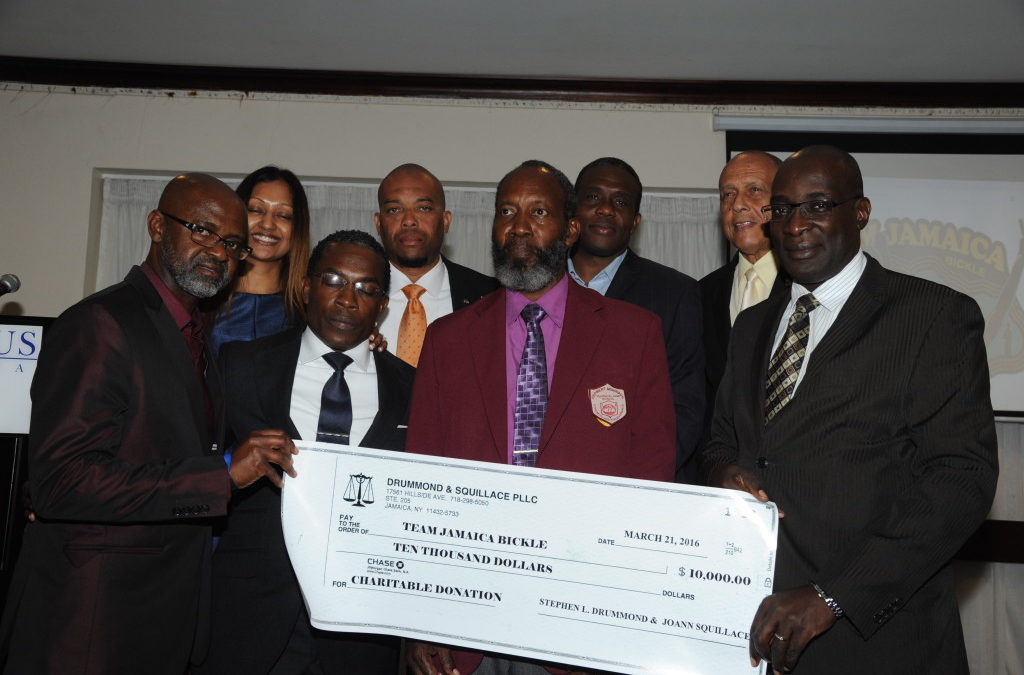 New York/CMM… As part of ongoing preparations for the annual Penn Relays, Team Jamaica Bickle (TJB) recently launched its 2016 season at a private reception held at the Jamaica Pegasus Hotel in Kingston on Monday, March 21. A twenty-member team traveled to the island to the annual ISSA/Grace Boys & Girls Championships, which ran, March 15-19 at the National Stadium, before hosting the launch the following Monday.

In bringing greetings to the audience, Minister, Ruel Reid, spoke of his admiration for the organization and the work it’s doing and wished for its continued success.

TJB’s Special Guest, Stephen Drummond, Esq., who is based in New York, presented a check for USD $10,000 to the organization. He also announced a major financial boost by his law firm, DRUMMOND & SQUILLACE, PLLC to Herbert Morrison (of which he’s an alum) to provide free lunch for one year to the entire student body.

Now in its 22nd year, TJB has over the years formed numerous strategic partnerships to support not only athletes but the schools from which many of them hail.

Support for athletes at the annual Penn Relays Carnival, held at the University of Pennsylvania in Philadelphia, includes, meals, transportation, booking and coordinating hotel accommodation and chiropractic care.

Having had the distinction of being the first Jamaican/Caribbean sponsor at the Penn Relays, TJB opened the doors and consequently the very lucrative Diaspora and mainstream markets to mega brands such as Grace Foods, (now title sponsor), Jamaica Tourist Board, VMBS, LIME, Digicel, Jamaica National, Western Union/GKRS Money Services, ?Caribbean Food Delights, Golden Krust, Tower Isles and others who now participate or have participated in the three day carnival, gaining exposure to the over 115,000 spectators on hand and millions more through the NBC Saturday national broadcast. This year the organization welcomes on board,?Philadelphia International Medicine (PIM). They will provide two sports medicine physicians to assist with the care of the athletes.at the Penn Relays, Saturday, April 30,

Dervan Malcom, host of Power 106 FM and the extremely popular “Diaspora Live” Program was presented with the Team Jamaica Bickle Award for using that platform to give the Diaspora a greater voice.

For more information persons may call 718.523.2861 or email teamjamaicabickle@gmail.com