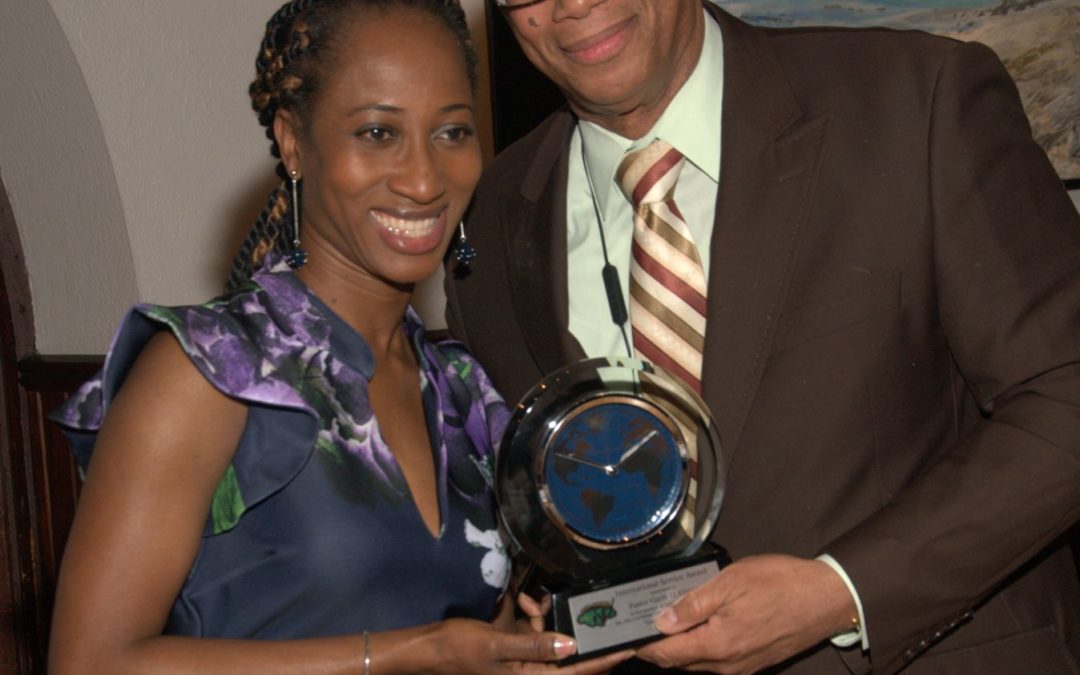 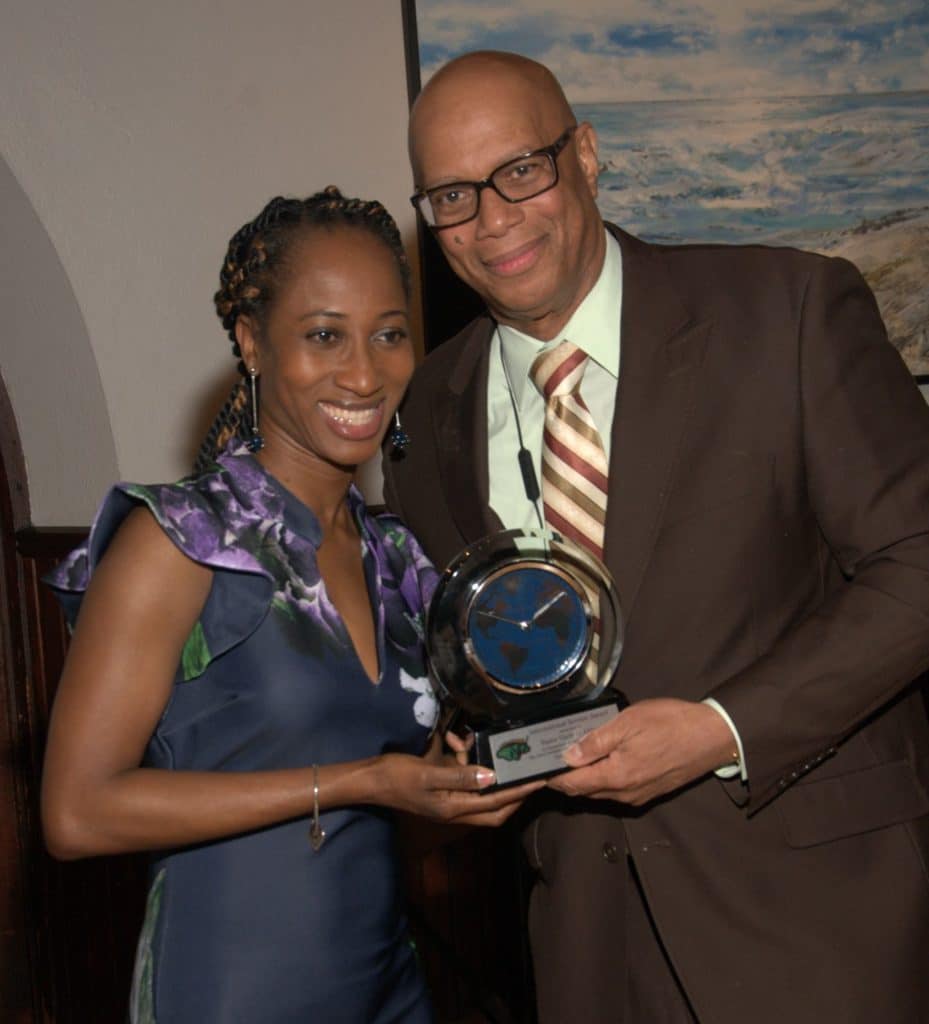 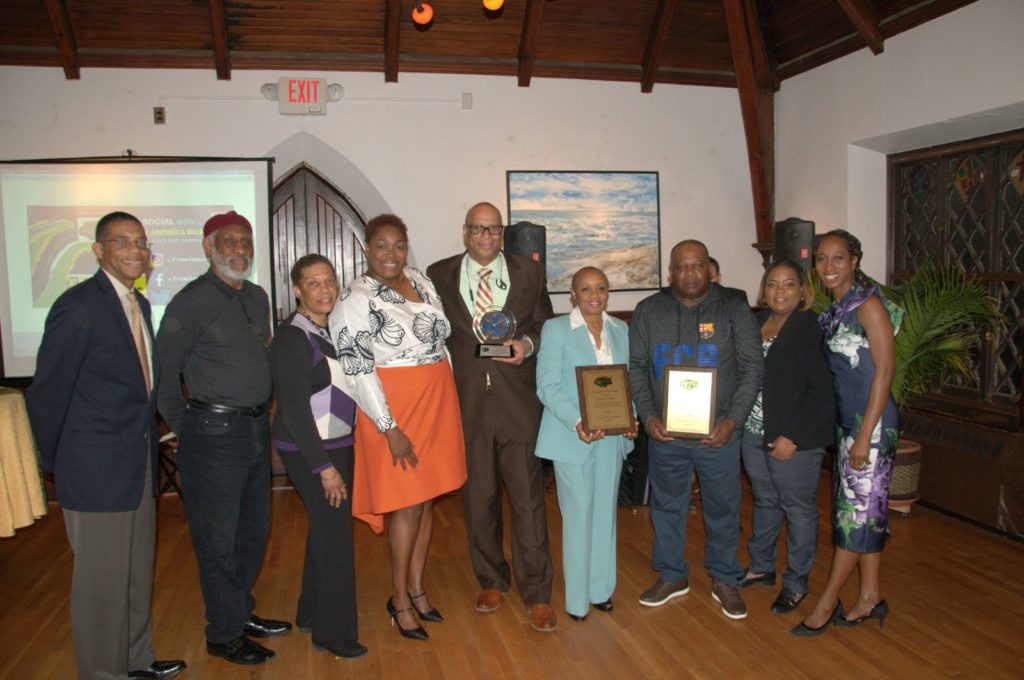 Courier Express: Wow! Time certainly flies. It’s hard to believe that Team Jamaica Bickle has been in existence for 24 years. Twenty-four years of assisting the Jamaican athletes who dare to dream of competing in the annual Penn Relays that has taken place at the University of Pennsylvania for over 100 years.

Team Jamaica Bickle’s founder Irwine Clare Sr. and current CEO founded the organization in order to provide meals, ground transportation, subsidized hotel and other services to the more than 500 athletes. Every year leading up to the relays the Philadelphia’s Organizing Committee of Team Jamaica Bickle continues to host several fundraising events in order to support the athletes. One of the main events is the Annual Community Service Award and Fundraising Reception.

This year’s event took place on April 18 at Church of the Asaph in Bala Cynwyd, Pennsylvania. The island setting was right. Walking in to the sound of the steel pan music, the smell of jerked chicken wings, patties and cod fish fritters put everyone in the mood for all things Caribbean. There were old and new friends who came out to show their support.

The mistress of ceremonies Andrea Lawful Saunders set the stage for an enjoyable evening with her comedic and entertaining style. A young Jamerican brother, Daniel Walker, opened the event with his rendition of the American anthem and the Jamaican anthem. Talk about good vibrations!! His voice was phenomenal.

Stanley Straughter brought the official greetings from Councilwoman Jannie Blackwell and the city of Philadelphia. Although she could not be there in person, Blackwell sent in her donation which the team greatly appreciated.

Russell Errol Anderson also known as “Andy” owns and operates a small business in the Wynnefield section of Philadelphia. He is a son of Jamaica who was born in the parish of St. Elizabeth. When Andy came to the Philadelphia area in 1991, he enrolled in classes at the Philadelphia Community College and eventually became a manager at Pep Boys. He balanced his work with his real passion which was cricket. He was a member of the Philadelphia Cricket Club and still serves as a referee for many teams. Errol Anderson is a proud volunteer of not only Team Jamaica Bickle Philadelphia, but also the Annual Caribbean Festival.

Cecelia Straker hails from St. Vincent & the Grenadines and has been active in the Caribbean Community for many years. She has a passion for Caribbean music and the gospel, so its very fitting that Straker is the host of a Caribbean gospel program on 91.7 FM WKDU radio on Saturday mornings 10 a.m. to noon. She currently serves as the entertainment coordinator for the Caribbean Festival and also manages Faith & Favor a Caribbean gospel band located in Philadelphia. Straker is especially proud of the fact that she earned a Bachelors of Arts degree from Pace University, and is now a business consultant coach and also the owner and CEO of JCS Janitorial Services and Cece’s Pies.

Pastor Garth Gittens is the senior pastor of Calvary Baptist Church at 6122 Haverford Ave. in West Philadelphia. This man of God is a church planner and bible school lecturer for many years. He is a graduate of Wheaton College where he studied Biblical languages and earned a master’s degree in theology. Gittens continued his studies at Northern Illinois University where he earned a doctorate degree in education. In addition Gittens is a trained quantity surveyor. Gittens is proud of his family: his wife Gillian of 29 years and their children Minister Andre and Gabriel Gittens. After receiving his award Pastor Gittens commended the members of Team Jamaica Bickle. He also made a commitment to Team Bickle that Calvary Baptist will become a sponsor in 2019.

Junior Gordon said it best “I have been a volunteer for 10 years but this is my second year as a part of the committee. Volunteering with Team Jamaica Bickle every year is a satisfying experience. I am motivated every year serving in the background. Even though a part of my job is making sure that the supplies are replenished it’s always a pleasure. Team Jamaica Bickle rocks.”

The officers and members of Team Jamaica Bickle Philadelphia extends a hearty thank you to all volunteers and supporters. Please come out to the Community Forum that will be taking place on April 26 at 6:30 p.m. at the First African Baptist Church located at 67th Street and Lansdowne Avenue in West Philadelphia. Hope to see you there.