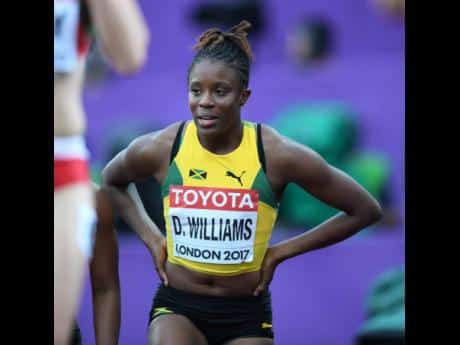 President of the Jamaica Athletics Administrative Association (JAAA) Dr Warren Blake says that 2015 one hundred metres hurdles world champion Danielle Williams will not be assured of a spot on Jamaica’s team to this year’s World Championships even if she wins the Diamond League trophy in the event this season.

Williams was disqualified from the final of the women’s 100m hurdles event at the recent Supreme Ventures Limited/JAAA National Senior Championships – the trial meet for national selection to several events, including the World Championships, after she was deemed to have false-started last Sunday at the National Stadium.

She later contested the decision and refused to leave the track, leading to a delay of over 20 minutes. The race eventually went off without Williams, but there was more controversy as the race was again recalled, with several athletes later stating that they did not hear the recall gun.

The event was later ruled null and void by organisers, with the JAAA later announcing that Williams would remain ineligible due to her disqualification and that the country’s representatives for the event would be selected based on their IAAF ranking as of August 16, 2019.

However, with Diamond League winners getting wild-card entries to the World Championships, enabling their countries the possibility of having four entrants in the particular events, it was felt that Williams, who, up to yesterday, ranked as the second-fastest Jamaican and fifth fastest overall this season with a time of 12.66 seconds, could find a route back into the team.

However, Blake told The Sunday Gleaner that in the event that Williams is able to secure a wild-card spot from her exploits on the Diamond League circuit this season, she would still not be guaranteed a spot on the country’s team, noting that the decision would entirely be left up to the JAAA executive.

“The JAAA executive (would) have to meet and decide if they would accept the invitation on her behalf,” said Blake in response to the scenario.

“Like we do with any Diamond League or World Champs winners, anybody who gets a spot, we will have to decide because it is up to the federation to decide whether they will accept the invitation on the athlete’s behalf,” Blake added.

Blake could not indicate the circumstances under which an invitation would be denied on behalf of an athlete but did point out that Williams would not be allowed to run at the World Championships as an independent athlete.

“Nobody can run without being associated with a country, only in the case of the Russian athletes who got the authorised naturalised status,” said Blake. “Every other athlete who takes part in a World Championships must be associated with a federation.”