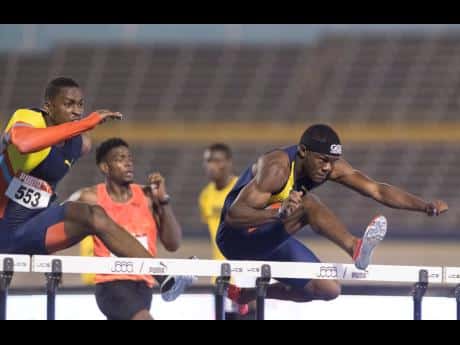 Jamaica will have a very good 110m ­hurdles team in Doha, Qatar, for the IAAF World Championships this September. Moreover, one coach believes that the 110m hurdles will soon be one of Jamaica’s premier events. Craig Sewell, who has coached newcomer Orlando Bennett to a place on the team to Doha, says the world had better look out for Jamaica in the barrier race.

At the JAAA/Supreme Ventures National Senior Athletics Championships on Sunday, respective 2018 and 2014 Commonwealth champions Ronald Levy and Andrew Riley were split by Bennett in the final, with Levy winning in 13.23 seconds. Those three will join 2017 winner Omar McLeod as all defending champions have a guaranteed spot in the first round in Doha.

“It’s very good, a very good unit with the likes of Levy and also Riley,” Sewell said. “He had a little setback. He got injured, but he’s a competitor, a very good competitor.”

Noting that the ISSA/GraceKennedy Boys and Girls’ Athletics Championships Boys Class One, Two, and Three records have all been broken recently, Sewell agrees that the Jamaican hurdling surge could run through the 2024 Olympics.

“Twenty-twenty four says, ‘Hey! We’re coming at the world’,” he projected. Starting his analysis with the Class One record of 13.06 seconds by Wayne Pinnock of Kingston College this year, he said, “… Before that, Dejour Russell 13.10 and 13.20 and, last year at the Trials, Orlando Bennett and Damion Thomas running 12.99 and 13.00, that’s a good sign going forward for track and field for the 110m hurdles for Jamaica, so the world should be looking out for us.”

Thomas and Bennett went one-two at the National Champs last year, with Thomas equalling the world under-20 record. The same pair won the gold and silver medals at the World Under-20 Championships.

As coach of Calabar hurdlers, including World Under-18 champion Russell and Bennett, Sewell has a good idea why Jamaica has joined the ranks of the best in hurdles.

“You have coaches that are learning the discipline and good coaches out there,” he explained. “So I believe it’s going to be one of the premier events for the Olympics and World Championships going forward.”

Bennett feels that Jamaica will be a mighty force in Doha.

“I actually think we can go out there and ­dominate,” the 19-year-old predicted. “If we just put our heads together and just go for the three medals, when we go out there in the race, anything that happens, happens.”