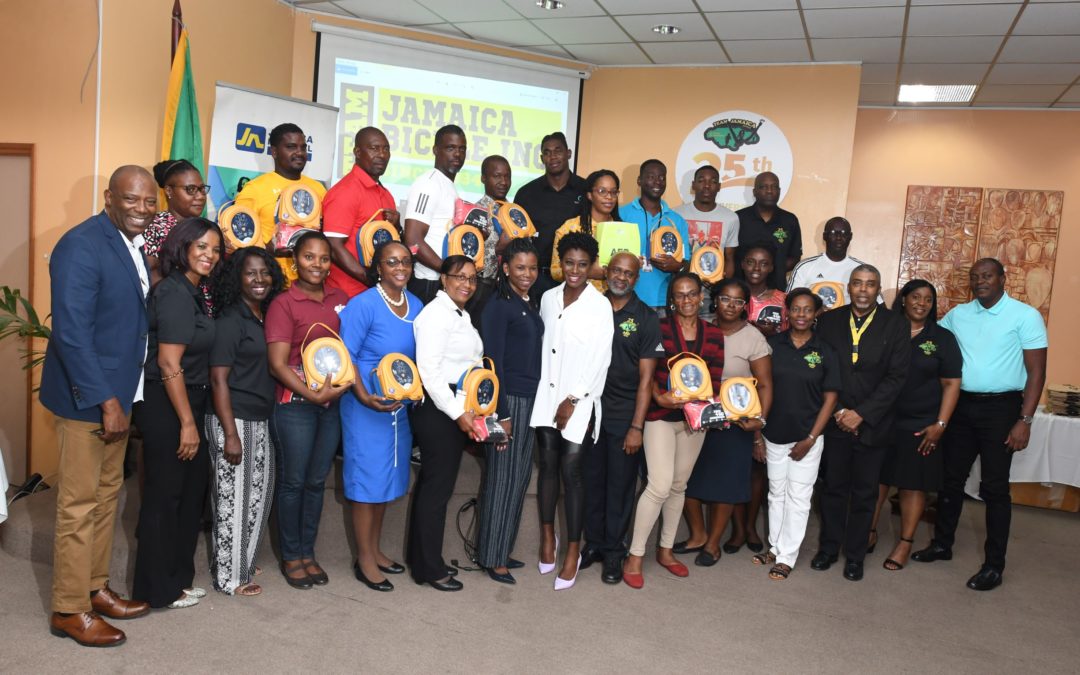 To mark 25 years of service to Jamaica’s athletes, Team Jamaica Bickle (TJB) made a commitment to donate 25 Automated External Defibrillators (AEDs) to schools in 2019 under its “Defibrillator to Schools” program. The organization was however able to donate 35 units, 10 more than planned through the help of kind sponsors. Thirteen (13) high schools; Annotto Bay, Claude McKay, Foga Road, Glengoffe, Glenmuir, Jose Marti, Holmwood Technical, Holy Childhood, Holy Trinity, Kellits, Ocho Rios, Robert Lightbourne, and William Knibb; The National Stadium and The University of the West Indies (UWI) Sports Department were presented with units for a total of 15 and over 50 persons trained in use of the machine and basic CPR. The presentation took place on Friday November 15, 2019 at the JAMPRO Auditorium in Kingston. Twenty (20) units were presented earlier this year to schools in Western Jamaica.

Shullette Cox, VP Research, Advocacy and Project Implementation, JAMPRO welcomed guests. She commended TJB and spoke of the partnership JAMPRO has forged with the organization as one that “leverages Brand Jamaica through sport” […] and which can propel “economic growth and investment in sport.”

Marie Stewart-Lewin, Executive, Office of the CEO, JN Bank, spoke of the importance of AED’s in managing high-risk activities of athletes. The athletes she said are “national treasures” whose health should be protected, adding that JN has seen the value in ensuring that AEDS are available in public spaces having worked alongside the Heart Foundation of Jamaica to make that a reality and emphasized the natural alignment with TJB.  She commended the organization on its recognition by the Penn Relays for 25 years of service to the athletes. JN donated five of the 15 AED units.

Bringing greetings on behalf of ISSA, President, Keith Wellington thanked TJB for its generosity to the schools in such a vital area, one in which help was needed. He conveyed thanks on behalf of the Principal and Teachers. He also noted that the National Stadium would for the first time be outfitted with an AED machine-a significant improvement as none was available before the donation.

The Dominic James Foundation which was recently launched was represented by Dominic’s Father David James and Board Member, Dr. Lawrence Nicholson.  In his remarks Dr. Nicholson noted that Dominic who tragically lost his life during a Manning Cup Match represented excellence. The mission of the foundation he said is to promote integrity, diligence and excellence, all hallmarks of Dominic’s life. The foundation would be granting academic scholarships to three students across the island that embodies those qualities; one from each county.

Elton Johnson, who represented Jamaica’s Ministry of Education Youth and Information, implored school administrators to follow the guidelines on sport and physical education published by the Ministry to ensure student safety.  He also commended the TJB organization for the vital step taken to ensure that emergency services are available both in the schools and for the public awareness built by the program. The Ministry, through Mr. Johnson, reminded the school administrators that AED units should be accessible to the broad school population and should not be locked away. Further, it is in everyone’s interest to see that the training received is shared widely with colleagues.

Both were guests of TJB in support of Jamaica’s long distance runner Kemoy Campbell who collapsed at a track meet at the Millrose Games in February 2019 and whose emergency treatment included the use of an AED machine.