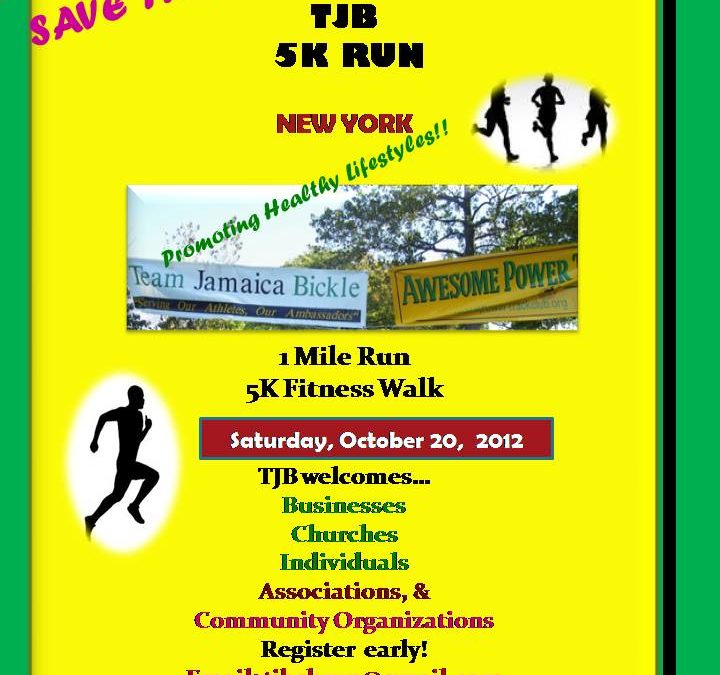 New York, September 25, 2012/CMM — As Team Jamaica Bickle (TJB) prepares for its 2nd annual 5K Run, scheduled for Baisley Park, Queens, New York, Saturday, October 20, 2012, there is one message that it wants to gets across—health! The theme, Promoting Healthy Lifestyles, is one that the organization is hoping will have significant impact on the Caribbean population in that region. Following up on a successful 1st staging in 2011, TJB is preparing for a banner year, all while fielding requests from Diaspora groups across the country to stage similar events in their cities.

The meet, which is USATF sanctioned, is being presented in association with Awesome Power Track Club and is expected to attract runners from the road race circuit across the northeast. Runners and walkers can participate in the 5K Run, 5K Walk or the 1 Mile Run. The overall male and female 5K Run champions will receive automatic entry to the Reggae Marathon, in Negril, Jamaica, plus air fare, hotel and ground transportation.

“We are extremely pleased with the continued support of the Reggae Marathon for the second year running,” said Irwine Clare, the organization’s CEO, “the community is being encouraged to get active and walk with us. In this year that Jamaica and Trinidad celebrate 50 years of political independence, coupled with the Caribbean’s prolific performance at the Olympics, This 5K is a fitting celebratory endeavor with a positive message for our community.”

Team Jamaica Bickle hopes that the message of health is one that will resonate with the community. In a recent health summit (Suny Downstate 2011 Caribbean Health Summit for Healthcare Providers) at SUNY Downstate Medical Center and University Hospital Center of Brooklyn, titled Health Disparities in the Caribbean Community, the health status of Caribbean blacks in the US, was described as having a ‘four-year’ poor health marker, due to a sedentary lifestyles, unhealthy diets, loss of major sources of social support, and greater stress of acculturation, a fact not so when they first arrive. It further pointed out that health care statistics show that Caribbean populations living in Brooklyn suffer disproportionately from a variety of health care concerns, including chronic diseases, infectious diseases, and mental health issues.

Team Jamaica Bickle, is pulling out all the stops to ensure that its objectives are met as it believes that using the sports platform to promote the message of health is one that the organization is uniquely suited to do. Encouraging the community to be more physically active is only the first step. Additional nutrition and health resources from a variety of sources will be available at the event to help to meet the various needs.