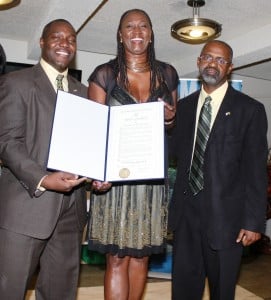 Two of Jamaica’s most prolific Olympians, Grace Jackson, OD and Bertland Cameron, OD, were both presented with proclamations from the office of Yvette D. Clarke, 11th Congressional District, New York; and ranking member of the Homeland Security Committee and member Small Business Committee, in the United Sates Congress; in honor of their outstanding contributions to sports both on and off the track.

The proclamations were presented at the Team Jamaica Bickle annual Reception and Awards Ceremony, on Thursday, April 12, in New York, which was hosted by fellow Olympian and Master of Ceremonies for the evening, Devon Harris, who captained Jamaica’s 1998 Winter Olympic Bob Sled Team. Other Olympians on hand to cheer them on were Alfred Daley, 400m specialist, who shared the stage with Lennox Miller, Donald Quarrie and later, a younger Bertland Cameron, Andria Lloyd, who represented Jamaica in the 1996 Olympics 4x100m relays and Danny McFarlane, silver medalist in the 4x400m, Olympic games.

It was an evening filled with the highest accolades and recognition from all levels of representation on the political landscape here in New York. The office of Leroy Comrie, Councilman, 27th District Queens, presented the honorees with citations and official letters for their exemplary service. Both awards were presented by Ms. Katherina Thompson, community Liaison Officer.  Ms. Monique D. Waterman, Director Community affairs, office of Council Member Jumaane Williams, Brooklyn’s 45th District, presented citations to both honorees, as well as to Irie Jam Media (community service awardees) and to Team Jamaica Bickle for its work on behalf of the athletes.

“Both Bertland and myself are extremely grateful to be recognized by an entity (TJB) who like ourselves are working hard to make a difference in sports,” said Grace ”to do something that you love and be honored by your peers is an extraordinary feeling.  Bert has expressed the wish that those who benefit from TJB’s efforts should get a chance to experience (as we just did) all the work that goes into making everything possible; kudos to the hardworking team of volunteers of TJB.”

Jamaica’s Minister of Sports without portfolio, Natalie Neita-Headley delivered a special recorded message to the honorees on behalf of the Government and people of Jamaica, in which she spoke of her, “delight in joining Team Jamaica Bickle and the Diaspora in celebrating Jamaica’s best assets; her people…against the backdrop of Jamaica’s 50th Anniversary of Independence.”

It was a full house that bore witness to this momentous occasion, with members of the community, stakeholders of the sports and entertainment industry, the business community, and the media who came out in their hundreds to show their appreciation for the honorees. Jamaica’s, Deputy Consul General to New York, Ms. Sharon Burrell Green and Mr. Christopher Castriota, newly appointed community relations officer, as well as a contingent from the Jamaica Tourist Board New York tri-state region: Kenton Senior, Ruth West, Marcia Sinclair and Anthony King were out in full force.

“We are overwhelmed by the outpouring of love and we thank the community whole-heartedly. It was indeed a special evening as we celebrate the nation’s 50thAnniversary of Independence,” said Irwine Clare.