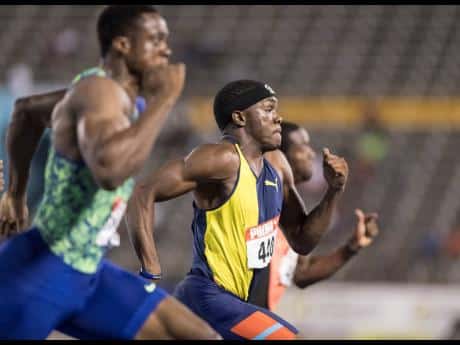 “I always believed in myself, so I just went out there with the intention that I have to give everything, just get going from the start and see what happens towards the finish.”

Those are the words of 19-year-old Orlando Bennett, who hurdled his way on to Jamaica’s team to the 2019 World Championships last Sunday in the 110m hurdles.

Just a year after his last race as an under-20 athlete, Bennett scurried home in a personal best 13.27 seconds to capture the runner-up spot in a hotly contested final.

“Not many juniors get to run such a good time in their first year as a professional or as a senior, so, right now, I’m just astonished,” said the man whose former best was 13.58.

“I was just aiming for the qualifying standards for the World Champs (13.46) and just making the team, but I have to give God thanks.”

Revelling in the opportunity to race stalwarts like Ronald Levy, Andrew Riley, and Hansle Parchment, the articulate Bennett said he felt he had to prove that he was ready to compete at this level.

YOUNGEST IN THE FIELD

“It was a great feeling knowing that I was the youngest in the field, and I had something to prove. I came out there and I was, like, ‘I don’t have a reason to fear anyone, you know, based on their achievements, because I know what I’m capable of and I know what I can do’,” Bennett shared, before making it clear that he was looking to take his improvements even further.

“It was a big PB, but I think I have more potential. Being number 7 in the world at 19 years of age, I consider that a big achievement. The Pan-Am Games, the World Championships, let’s see what can go on for the rest of the season. Let’s see if I can go faster,” Bennett added.

The big personal best makes Bennett the eighth fastest Jamaican of all time.

Coach Craig Sewell, who coached Bennett at Calabar to two Carifta gold medals, the number two-ranked under-20 time ever, and the 2018 World Under-20 Championships silver medal, wasn’t shocked.

“Truthfully, (I was) surprised but not that much because Orlando Bennett is a hell of an athlete,” Sewell smiled before adding that he thought that the athlete would certainly go faster in the event.

“We’re gearing him for the World Championships, really gearing him. I don’t think he was peaked for Trials, so we are working towards that going forward,” planned Sewell, who also guided Phillip Lemonious to the final.

Bennett, who started athletics as a hobby, says he runs to make his family proud.

“I run for my mum, my dad, my sister, all my family that is close to me. I’m a young man trying to make a difference in the world and to inspire other persons so that they can be better as well and uplift themselves,” he added.

He will get that opportunity in Doha later this year as the world watches on at Jamaica’s newest sprint hurdling promise.