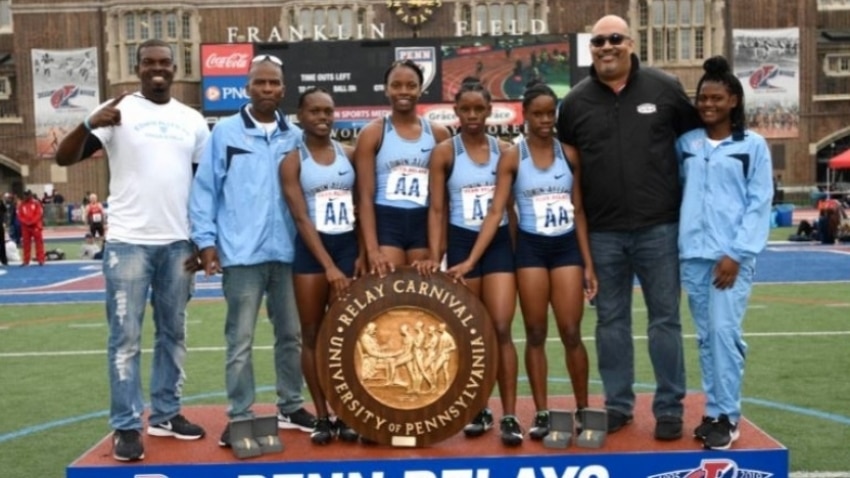 A youthful Edwin Allen team with a pair of 14-year-old twins stole the show at the Penn Relays on Friday’s second day of the Penn Relays when they smashed the meet record in the High School Girls Championship of America.

The team of Serena Cole, Kevona Davis, Tina Clayton and Tia Clayton clocked an incredible 43.62s, destroying the field and winning by more than a second.

The previous record of 43.96s was set by the Edwin Allen quartet of Kashieka Cameron, Kevona Davis, Shellece Clarke and Patrice Moody back in 2017.

Finishing in their wake was a game Hydel High School team of Shenese Walker, Ashanti Moore, Ray-Donna lee and Taffara Rose who crossed the finish line in a solid 44.69.

St. Jago – Thenelle Williams, Joanne Reid, Kayla Bonnick and Briana Lyston – also produced a good time of 44.78s which in this instance was only good enough for third.

This was Edwin Allen’s seventh consecutive win in this event at the meet, having won every edition since 2014

The team of Jessica McLean, Kayan Green, Nadine Rose, and Rushana Dwyer cruised to a winning time of 8:54.02, six seconds clear of Union Catholic 9:00.36 and Neumann-Goretti who were a farther three seconds back in 9:03.07.

While impressive, the win by Edwin Allen was never challenging the record of 8:37.71 set by the Vere Technical quartet of Charmaine Howell, Claudine Williams, Janice Turner and Inez Turner. Inez Turner was earlier this week inducted into the Penn Relays Hall of Fame.

In the College Men 4x200m Championship of America, the University of Houston that included Barbados’ Mario Burke, Nicholas Alexander, Amere Lattin, and Obi Igbokwe ran out easy winners in 1:22.04 leaving the University of Technology from Jamaica and Clemson University in their wake.

Utech’s squad of Malik James-King, Andy Williams, Devaughn Baker and Kemar Green were unable to match the exploits of the gold medal-winning teams from 2014 and 2015 and had to settle for the silver medal. Their time of 1:24.14 was four seconds off the 1:20.07 they ran in 2014.

Utech also finished second in the College Women’s 4x200m Championship of America in a close race with winners South Carolina who broke the tape in 1:32.78. Utech was less than a tenth behind in 1:33.86.

The University of Houston clocked 1:34.36 for third.

The meet was suspended in mid-afternoon because of dangerous weather conditions.