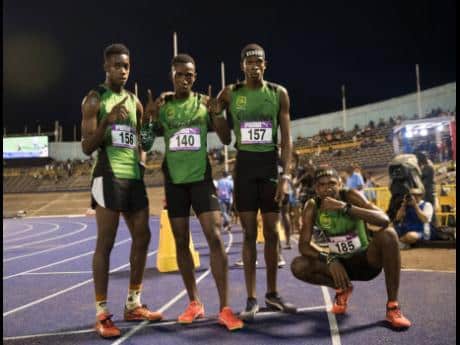 His stunning 4×800-metre anchor leg time-warped Calabar High School into the record books at 7 minutes 31.71 seconds. In a show of relay magic on Saturday, at the 42nd staging of the venerable relay carnival inside the National Stadium, Calabar went faster, even though their main man ran slower.

A stronger all-round effort produced a new Gibson McCook record – 7 minutes 29.02 seconds. Only Calabar and St Elizabeth Technical have ever done better among Jamaican schools in the eight-lap relay, and yet Farquharson had little to do.

In 2019, he hurried to catch a stubborn Jamaica College team and the urgency summoned the fastest 800m relay leg by a local schoolboy – 1.47.9! Thanks to teammates David Martin, Kevroy Venson and Rivaldo Marshall, Farquharson was able to cruise his leg in 1 minute 50.3 seconds last Saturday.

Martin, Venson and Marshall supplied the magic. Together they delivered the baton to their top man far in advance of last year’s pace, with the in-form Venson doing most of the damage. A year ago, he managed 1.54.3 on the second leg. On Saturday, he put Calabar in the lead for good with a solid run timed in 1 minute 50.5 seconds.

Those who look towards the Penn Relays in April are already running the numbers. On the clock this year at 1 minute 49.46 seconds to amaze fans at the Camperdown Classic, the Calabar senior can definitely go faster. After all, his personal best is the Boys and Girls’ Championship Class One record of 1 minute 48.67 seconds.

That wasn’t the only highlight on Saturday.

The terrific Edwin Allen High School Class Two 4x100m team flew around the track in 43.73 seconds, a tick faster than the all-time Class Two record it set at Central Championship a week and a half earlier. Given the obvious speed of Kevona Davis in Edwin Allen’s victorious Class One team, the school’s Penn Relay record of 43.62 seconds is in grave danger.

Lest you forget, the Penn record is the quickest 4x100m ever by a high school team.

Maybe the Jamaica record in the men’s 4x400m will soon be under threat too.

With Akeem Bloomfield and Nathon Allen looking to have overcome the injury issues of 2019, with surprise package Terry Thomas looking solid and Demish Gaye under control in a 44.5 second tour of duty for Sprintec, Jamaica looks ready for a challenge to the wonderful record of 2 minutes 56.75 seconds.

If relay genius Javon Francis is back at 100 per cent this season, the national mark could be approached.

Host school Kingston College took the 2020 high school 4×400-metre leading time under 3 minutes and 10 seconds with a stirring run of 3.09.70. The race revealed some of the combatants in the Class One 400 metres at the upcoming renewal of Boys and Girls’ Championships. St Lucian Michael Joseph put the Purples in front for good with a 46.4 anchor. Closing fast for Holmwood was Pan-Am under 20 bronze medallist Bovel McPherson in 46.1. On the second leg, Excelsior’s Corporate Area champion Demar Francis produced an evenly distributed 46 flat.

The 4x400m also produced confirmation that Farquharson is ready to zoom. On anchor for Calabar, he stormed home in 46.7 seconds. In this kind of form, he can definitely go faster at 800 metres.

Hubert Lawrence has scrutinised local and international track and field since 1980.